“The quartet Novecento wants, with this initiative, to present a different and distinctive offer which completes the chamber music panorama from Santiago de Compostela.”

All of whom are members of the Real Filharmonía de Galicia, who decided to unite and form a permanent string quartet.

The quartet Novecento offers something more than just the traditional repertoire: It focusses on music written at the end of the impressionism era and covers the whole 20th century. Unknown or little known music, but always fun, always evocative and always original Every work in their recitals represents a country, a culture or musical philosophy full of contrasts, ready to move and satisfy the emotions of their audience. The quartet, Novecento, wants, with this initiative, to offer a different perspective to complete the chamber music panorama of Santiago de Compostela.

The inaugral Novecento Quartet concert took place in June of 2016 in the Paraninfo hall of the University of Santiago de Compostela, with works by Turina, Britten, Shostakovich and Bartók, and had enormous success with the audience and critics alike.

In 2018, they collaborated on the recording of “Fios de ouro no ár”, a CD of Galician music by Rodrigo Romaní.
In the same year, they promoted the cycle “Female Composers” with the University of Santiago de Compostela. As a result of the commission by the Betanzos town council, they premiered the String Quartet no. 11 by the Galician composer Carlos López García-Picos. 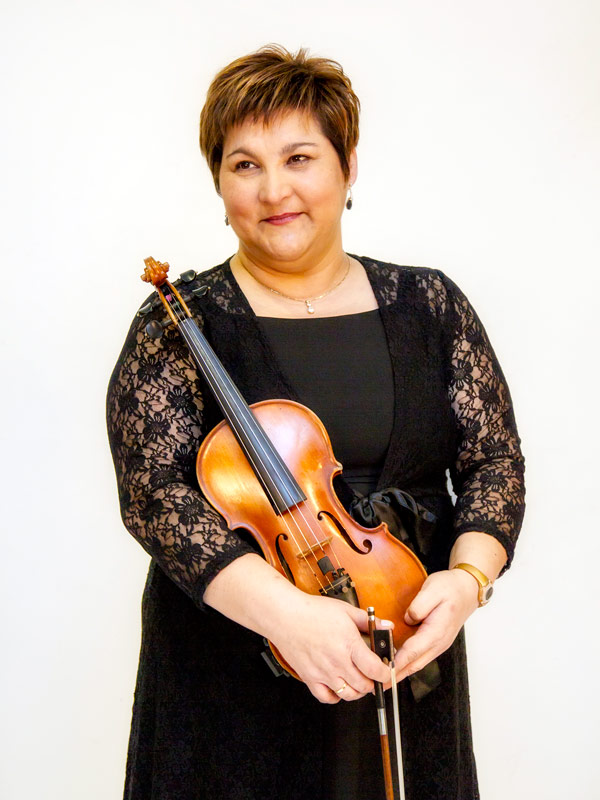 Born in Budapest, Hungary, she studied music in the Franz Liszt Academy of Music in her hometown. She graduated in 1995 as a theory teacher and choir conductor and in 1996 received the degree of soloist and professor of violin. She worked in the Ferenc Erkel Chamber Orchestra as assistant concertmaster, in the “László Lajtha” String Quartet, in Franz Liszt Symphony Orchestra of Budapest as concertmaster and with the Ernö Dohnányi Symphony Orchestra of Budapest as concertmaster and several times as soloist. With the “Lásló Lajtha” String Quartet and the “Ferenc Erkel” Chamber Orchestra she participated in several recordings on the Naxos music label. Since 1996 she is a member of the Real Filharmonía de Galicia and since 2001 she is a violin and chamber music professor in the Escola de Altos Estudos Musicais in Santiago de Compostela. She performed as soloist with the RFG under the baton of Paul Daniel 2008 and performed the 2nd Violin Concerto by Béla Bartók with Antoni Ros Marbá in 2010. 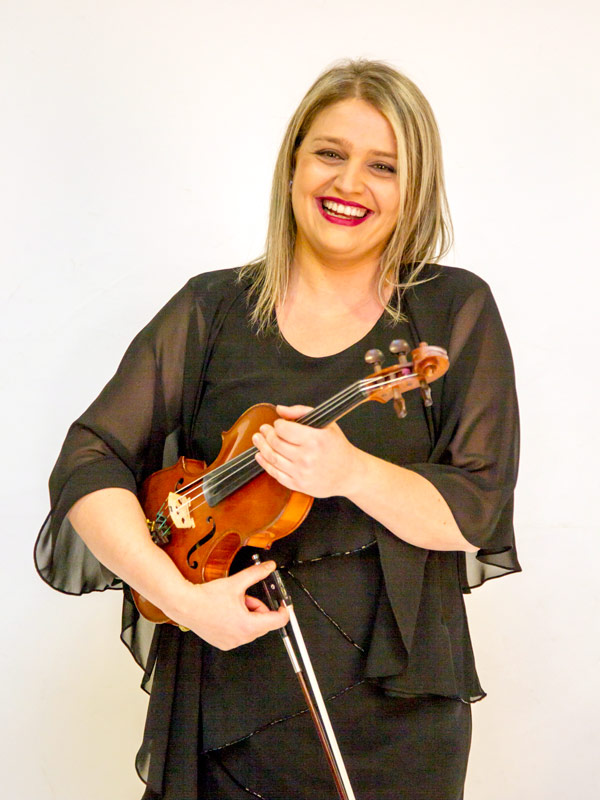 She was born in Brasov, Romania. She completed her music degree in the United States of America. In 2002 she graduated from the Hartt Conservatory in the USA, specializing in violin, where she studied with Philip Setzer and Eugene Drucker, the two violinists of the famous Emerson String Quartet. In 2003 she won an audition with the Real Filharmonía de Galicia in Santiago de Compostela, where she has since developed an intense musical career: in addition to her work with the Real Filharmonía, she is part of several chamber music ensembles, such as the Novecento Quartet and the Berenguela Piano Quartet. In 2012 she completed her studies in “Kindermusik” and began a relationship with several nurseries and musical schools in order to give a strong musical foundation to the new generation of children of Santiago de Compostela. Since 2013, Irina presents and translates many of the family concerts of the Real Filharmonía de Galicia, successfully accompanying conductors such as Paul Daniel and Jonathan Webb. 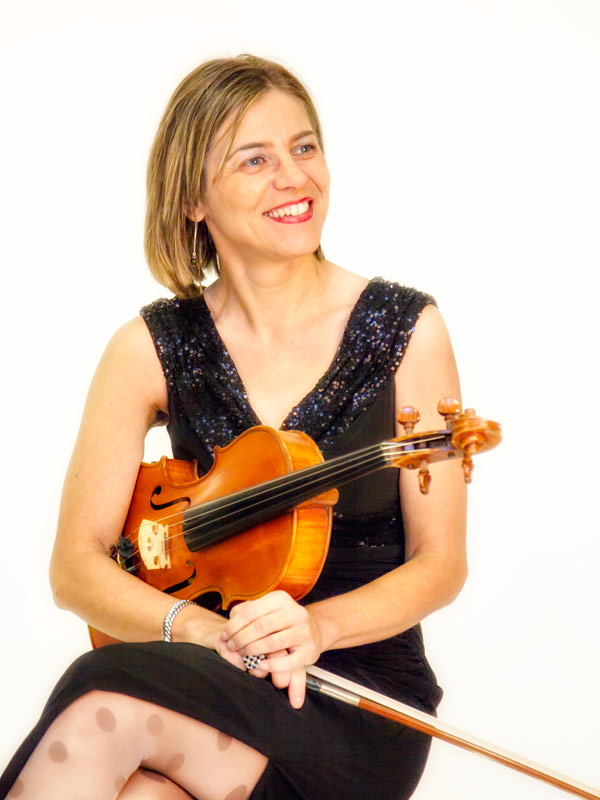 She began her studies in her hometown of Râmnicu Vâlcea in Romania at the age of 6 years old. Very early she won prestigious music competitions in her country until she began studying with Valeriu Pitulac in the Bucarest Academy of Music, where she graduated in viola performance with the highest grades possible. She completed her studies afterwards in the Music Conservatory of Saluzzo in Italy with the professor Alfonso Ghedin of the Accademia Nazionale di Santa Cecilia in Rome, and with other professors, such as Gérard Caussé. She began her career in Switzerland with the Fiori Rari Orchestra, a position she combined with her commitments as solo viola of the Bucharest Young Symphonic Players until 1996, at which point she joined the prestigious George Enescu Philharmonic in Bucharest, where she stayed until 2000. The following year she worked in Japan with the Milenium Arts String Quartet and, later, moved to Brazil, to work with the State Orchestra of Sao Paulo in Brazil. Since 2001 she is a member of the viola section of the Real Filharmonía de Galicia in Santiago de Compostela and an active member of the Taller Atlántico Contemporáneo (TAC). 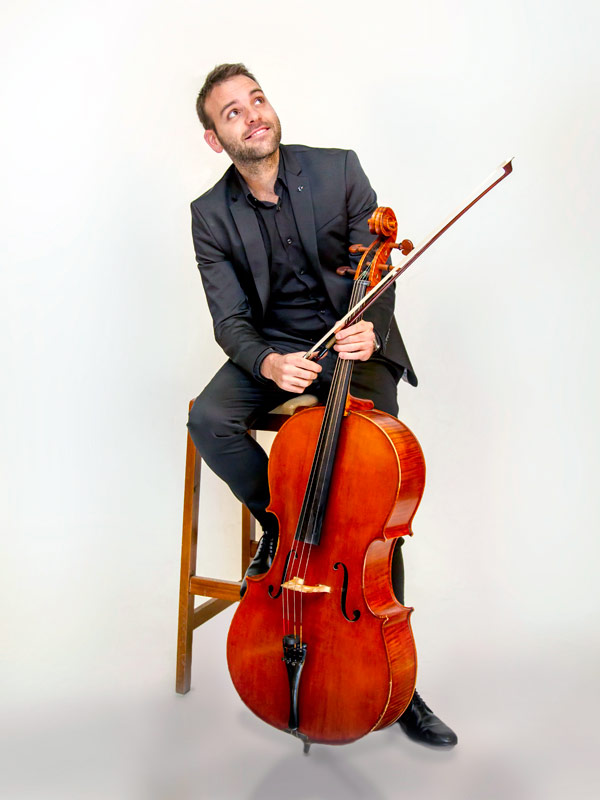 From Silleda, he began his cello studies with Tatiana Cucerenco and Vera Kolar. He continued his bachelor studies in the CSMA (Zaragoza) with Ángel Luis Quintana and Bárbara Switalska, with Natalia Shakhovskaya in the Escuela Superior de Música Reina Sofía in Madrid and with Troels Svane in the Musikhochschule Lübeck (Germany). He has won varios prizes throughout his career: 1st prize in the Concurso Nacional of Cello (Carcaixent), 1st prize in the Veo Veo Foundation (Accésit), 1st prize in the Concurso Ruperto Chapí (Villena) and 1st prize in the Concurso Santa Cecilia 2014 (Portugal). Founding member of Bambú Ensemble and Duo Gamma, he was a member of the Spanish National Youth Orchestra (JONDE) and has worked with many different orchestras, such as the Orquesta Nacional de España, Orquesta Sinfónica de Galicia, Orquesta de Cámara Reina Sofía and the Orquesta DaCamera. He received scholarships from the BBVA Foundation and the Segundo Gil Dávila Foundation. Since 2014 he has been a member of the Real Filharmonía de Galicia and teaches in the Berenguela music school. 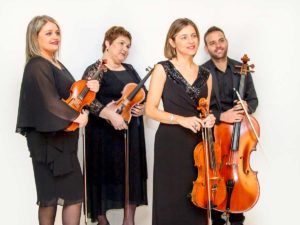 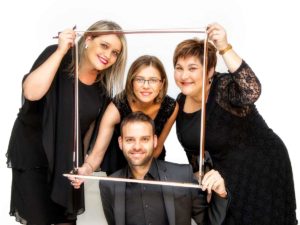 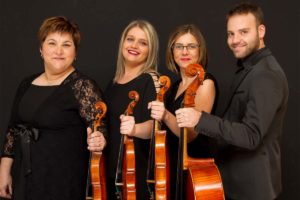